My Spring Day post is a little late this year, I must apologise!

I am normally so on the ball with this seasonal celebration of Springtime’s arrival. I thought I would talk about it this year, in the discussion of my latest poem I have written when I was inspired by the furious battle of Winter and Spring fighting it out over their time to be here. Of course, in the authenticity of nature, there are no guarantees or official rights, however, I couldn’t help notice the dominance of Winter, this year. If you would like to read this poem before I begin, I will link it just below:

I’m not one for complaining about the weather a lot, however, at this time of year, my patience is really tested and I do often get angry with Mother Nature when the boundaries of Spring and Winter are disrespected. I guess this is when I feel that Winter has been going on long enough and sense that the natural world wants to get on with life that causes far less struggle when the milder days of Spring are here. Birds have been fighting icy winds as they forage for nest-building material and food, the first lambs, huddled for warmth within their tiny coats and Spring blooms struggling for sunlight, reaching out from snow drifts. Winter really has been the most stubborn thing this year.

You may notice, in the poem, that I referred to Winter and Autumn as masculine, whereas Spring and Summer are feminine. To me, all seasons have their powers, yet they are used in very different ways, just as in the biological form and attributes of most male and female animals.

I see the colder months as male because they have that brute physical strength that it takes to freeze waters, create huge, powerful snow drifts out of singular snowflakes (I suppose also like being carriers of sperm) and just has an overall picture of a season doing it’s job as part of the cycle with little empathy and an expectation for life to just “man-up” and get on with it- “things need to die or sleep in my season, so learn to adapt or join the dead or sleeping because I’ve got a job to do”.

Autumn or Fall, on the other hand, is the juvenile, the learner and apprentice or even the Son of Winter. He lowers the temperature, but not quite as cold as Winter, causes death to leaves, perhaps as a way to protect them before the wrath of Winter has his way. Autumn is more forgiving- the innocence of a child still at heart, yet the intent to fulfil his duty and prepare the world for Winter.

Autumn and Winter also have their confrontations. When Winter feels that Autumn is not doing his job right and feels the need to stand in, as an impatient, testosterone-charged father may step in to teach his son a lesson when he feels that he is not cooperating. I imagine when that happens, this is the result: 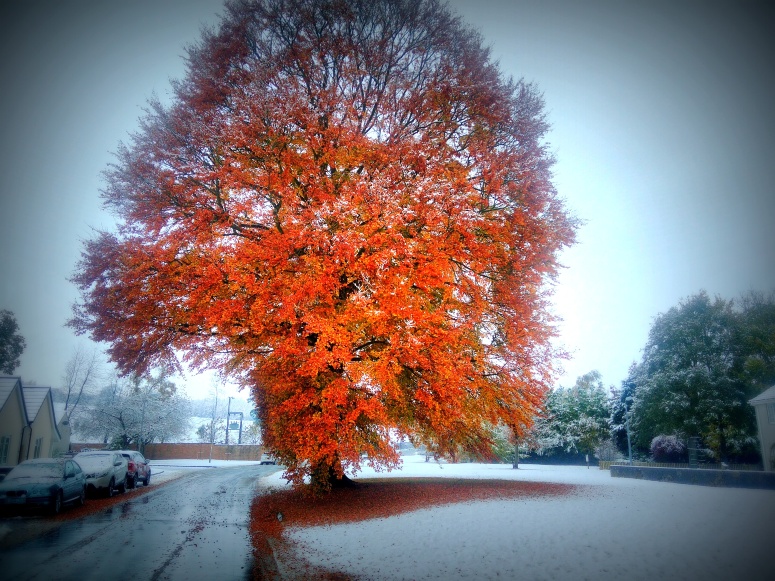 Summer and Spring are more feminine because they are warmer in nature and provide a more comforting environment. Spring’s role is to provide an ideal, gentle environment for new life to grow, just as a womb is designed to develop a fetus.

Spring’s source of power is that time of year where the Sun is closer to the Earth, therefore, Winter’s only weakness in the great battle. As times goes on, Spring only gets stronger, like a growing juvenile, wising up with experience.

Summer is the mother of the warmer months and longer days- perhaps reflecting the never-ending days of a mother’s responsibilities? They are long and demanding but so warm and full of joy.

Just a little disclaimer: the ideas of the gender characteristics I have covered are basically my idea of how they relate to the seasons and not implying how people should behave in terms of their own gender- this is just how I see male/female tendencies in various species.

At this time of year (mid-March- April) I see a never-ending conflict between the two Seasons: Winter and Spring. Neither really entitled to this time of year, but both determined to dominate.

Winter, in particular, is stronger as he is the adult season, showing masculine strength to prolong his stay. On the other hand, Spring tried desperately to find her inner power and the secret weapon that Winter will never be able to defeat- the Sun closing in on the Earth. The later we get into March and early April, Winter’s days are numbered and the tables will turn so Spring has the upper hand.

I talk of “recruits” in the poem: Snowflake Soldiers & Sun Beamers. These are the Seasons’ recruits and a visual, as I see the weather conditions conflict. The day after writing “A Prayer for Spring” I literally witnessed the metaphor I had just created. After a final huge snowfall in my village, the Sun came out and devoured the last of the “Snowflake Soliders” with her powerful “beams”. Being outside when the Sun was shining, I could feel the heat of them over the Winter wind chill. This told me that Spring was going in for the win!

I hope you have enjoyed my rather detailed explanation. Wow, I can certainly go on about nature and the metaphorical inspiration it contains! Thank you for reading to the end!

This site uses Akismet to reduce spam. Learn how your comment data is processed.